No Deposit Required to Book-In: ALL Payments are made on the day.
Cash Preferred due to Card Charges & Limited Signal on Site.
Look forward to seeing you soon!
Best Wishes,
R.I.F.T. HQ.

Site Info:
This Site is know as "Devils Pit" - a well known 4X4 course.
This old quarry has huge slopes, rolling hills, steep terrain with dense
woodland.... you really get the feeling of a large battlefield!
The land is over 40 ACRES in Size and complements all Airsoft Roles.
We usually add Static Vehicles into the Mix too

Site Facilities
Stone Parking Area - YES
*NOT SUITABLE FOR LOWERED VEHICLES*
(We can park you on the flat part of the Land by the Gate)
Free Battery Charging - YES
On Site Toilet - YES
Undercover Set Up Area - NO
On Site Mini-Shop - YES
Hot & Cold Food & Drink all Day - YES!

No Deposit Required to Book-In
Payment made on the day;
Cash Preferred due to Card Charges & Limited Signal on Site.

MEMBERSHIP IS NOT REQUIRED TO BOOK IN AND PLAY!
(You receive £5 off your Game Fee if you ARE a Member!)

Book a Game at The RIDGE

For RIFT to offer the best experience we ask all customers to arrive within the arrival period, gates are locked and access may not be permitted after gate closure.

Speed up the sign in process by downloading and completing our disclaimer!

Luton Road (B655)
Barton Le Clay
MK45 4LG (Nearest Postcode!)
If you are in Barton Le-Clay heading towards Luton,
the Site is on the left before you join the A6.
LOOK FOR THE RIFT AIRSOFT PARKING
SIGN BEFORE THE EXIT ONTO THE A6....
This Site is Known as "Devils Pit 4x4 Course" At ALL RIFT events we have an on Site Shop that sells pouches, mags, RIFs and more!

Age Limit
We are insured for ages 12 and Over

Eye Protection
Rift Airsoft Highly recommends FULL FACE Protection for all Players.
UNDER 18's MUST WEAR FULL FACE PROTECTION TO COMPLY WITH OUR INSURANCE
Full Face Protection will be available to borrow if required.
All players who bring their own Eye Protection on Site MUST ensure it can withstand a point-blank impact from a .20g bb @ 500fps.

FPS Limits (JOULE Limits will be tested on the day)

Pistols:
Spring, Co2 or Gas - not to exceed 350fps
(Co2 Weapons: Please insert a NEW Gas Bulb so we can Chrono it at its highest point - thank you)

Shotguns:
Spring, Co2 or Gas, single or Multishot - not to exceed 350fps

Support Weapons:
MAX 370 FPS - 20 Meter Minimum Engagement Distance (MED).
Support Weapons Firing between 350-370 FPS must adhere to 20 Meter engagement rule & may use a 4 second burst, with the bi-pod deployed, firing from a static fixed position. A Support Gunner may use a 2 second burst when they are moving from one position to another.
Side arm/smg required for CQB.
---
Support Weapons Firing 350 fps and below may engage at close range, however, we will ask that you do NOT fire Full Auto point blank at another player.
4 Second Burst allowed as long as the Bi-Pod is deployed and the weapon is being fired from a static fixed position.

Moscart Launchers:
NO Point Blank Shots.
NO Aiming for the HEAD.

We allow all Airsoft weapons on Site as long as they are strictly in line with UK LAW.

NO DRY FIRING OR TESTING YOUR WEAPONS
AT ANY TIME IN THE
CAR PARK OR SAFE ZONE
Please use the shooting range provided.
KEEP ALL WEAPONS COVERED & SECURED
WHEN TRANSPORTING THEM TO & FROM THE SITE

We allow the use of Hobby Lasers up to Class III/3r (Red or Green)
It is strictly forbidden to directly aim the Laser towards players eyes.
Lasers are to be used to intimidate and mark targets.

If you have a very high rate of fire, please keep to a ONE second burst when fired Fully Automatic to AVOID OVERKILL
HPA Weapons are welcome but must remain locked to the correct FPS limit for that particular Weapon type.

We allow the use of Hobby Lasers up to Class III/3r (Red or Green)
It is strictly forbidden to directly aim the Laser towards players eyes.
Lasers are to be used to intimidate and mark targets.

A Full Safety Brief will be held before the Games begin!

Bookings Open for "The RIDGE""

There are no scheduled future games, we add new games monthly! check back soon.

Location: Middle Wallop (near Andover), SO20 8DY
Next Game Day: No Plans 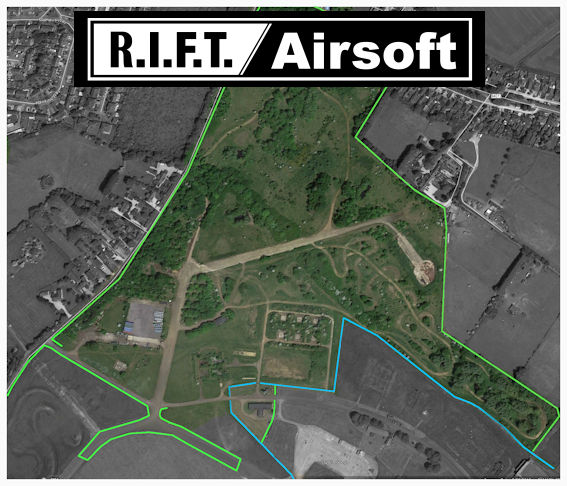